Not far from the dropzone on the Renkum Heath a modest ceremony at the Airborne monument at Heelsum.

The ‘Airborne monument’ in Heelsum consists of a number of parts. A metal statue of a parachutist hangs from an arch. The arch is crowned by a Pegasus. Helmets and guns are attached to the bow. A cannon has been placed under the parachutist. The gun is mounted on a foundation of containers. Two information signs are placed at the memorial. The memorial is approximately 3 meters 50 high, 3 meters 50 wide and 3 meters deep. It was established in 1945 with the material that was left after the landings.

This ceremony is traditonally held on September 17, the first day of the parachute drop of the Battle of Arnhem in 1944.

The official commemoration at 19.00 hrs is preceeded by a memorial service at the Churhc on the Hill, followed by a silent march at 18.45 hrs. This service is a cooperation of the churches of Renkum-Heelsum, together with the Airborne school. 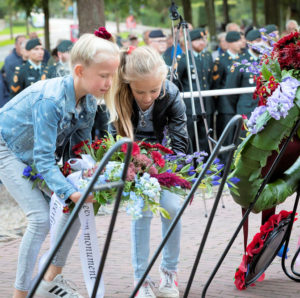