During this Airborne ceremony with an international contribution at the Airborne Square at the foot of the John Frost Bridge at Arnhem, all Allied soldiers are commemorated, who fell in battle whilst trying to conquer and hold the Arnhem bridge (John Frost bridge) in the 17 – 23 September 1944 period. British and Polish veterans, as wel as military and civilian officials, pay their respect to those who gave their lives for freedom by laying wreaths.

The event is preceded by the ‘March over the Bridge’ whereby massed Pipes and Drums Market Garden and Standard bearers cross the famous John Frost Bridge in a slow march into Arnhem.* The ‘Airborne monument’ in Arnhem is a war-damaged column of the former Palace of Justice and is on the list of National Monuments. The column is placed on a pedestal. The text on the column reads: ’17 SEPTEMBER 1944 ‘. The wreath laying ceremony is nowadays followed by a multi media event ‘Bridge to Liberation Experience’. 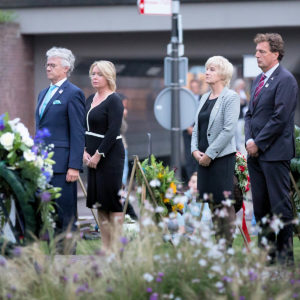